Internet Explorer is no longer a supported browser for the Communication Matrix so features may be missing. Please switch to a different browser, such as Firefox or Chrome.

The Communication Matrix is an assessment tool with robust scientific and clinical roots that helps those who support people with severe communication difficulties find a path to self-expression. It pinpoints an individual’s current communication level and gives a framework for determining future goals.

The Matrix was inspired by important research that came from a “pragmatic” approach to communication development that was first discussed by Elizabeth Bates and her colleagues. This approach considered what the child achieves by communicating using many different behaviors, rather than just looking at speech. Another influence was the work of Heinz Werner and Bernard Kaplan. They viewed the emergence of symbolic communication as a developmental process that is a natural outgrowth of early relationships between mothers, infants, and the objects or events in their environment. The Matrix was developed using these principles, paired with extensive hands-on clinical research involving individuals with complex communication needs, their caretakers, teachers, and speech language pathologists.

"The Communication Matrix has had such a huge impact on my practice in our center program! Your work is simply wonderful" - Speech Language Pathologist 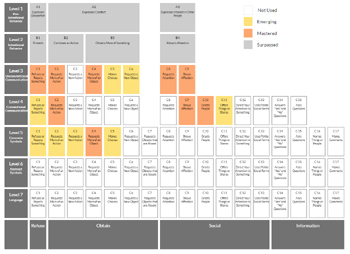 The Matrix is organized into four major reasons to communicate that appear across the bottom of the Proﬁle: to REFUSE things that we don't want; to OBTAIN things that we do want; to ENGAGE in social interaction; and to PROVIDE or seek information. 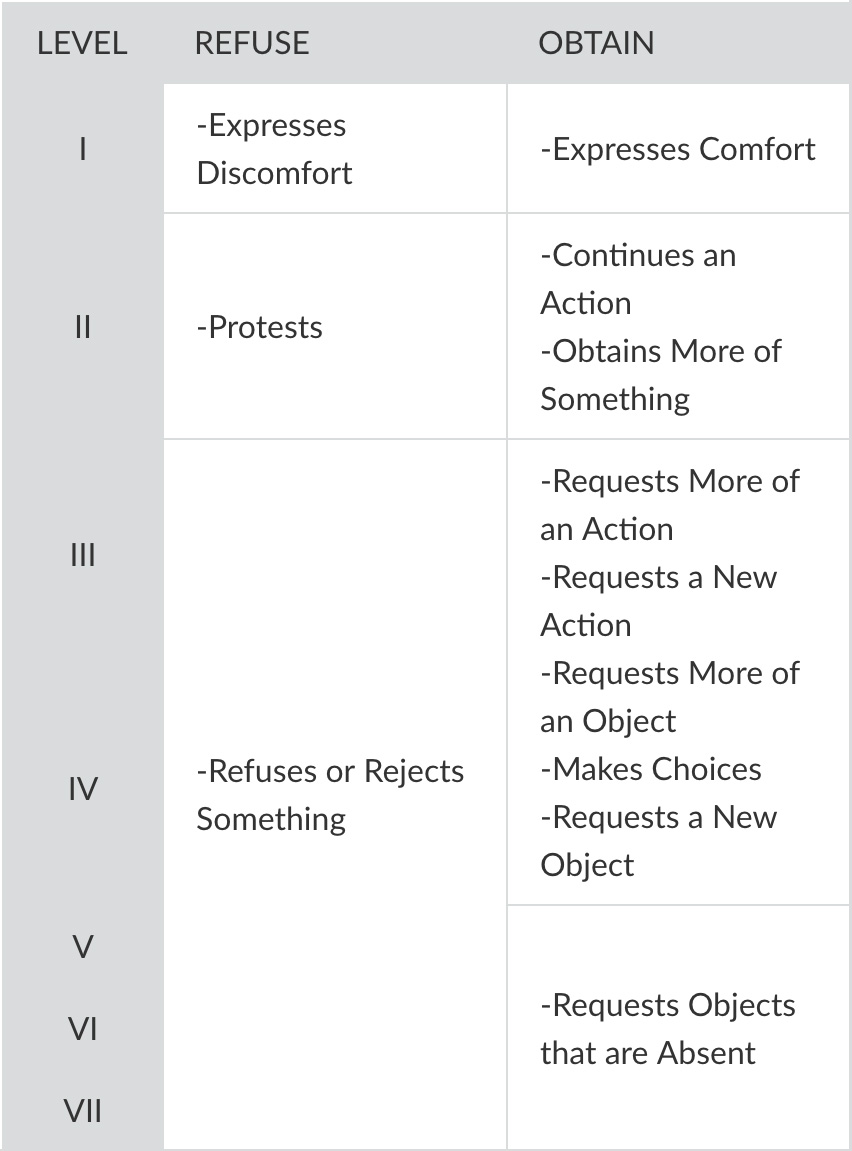 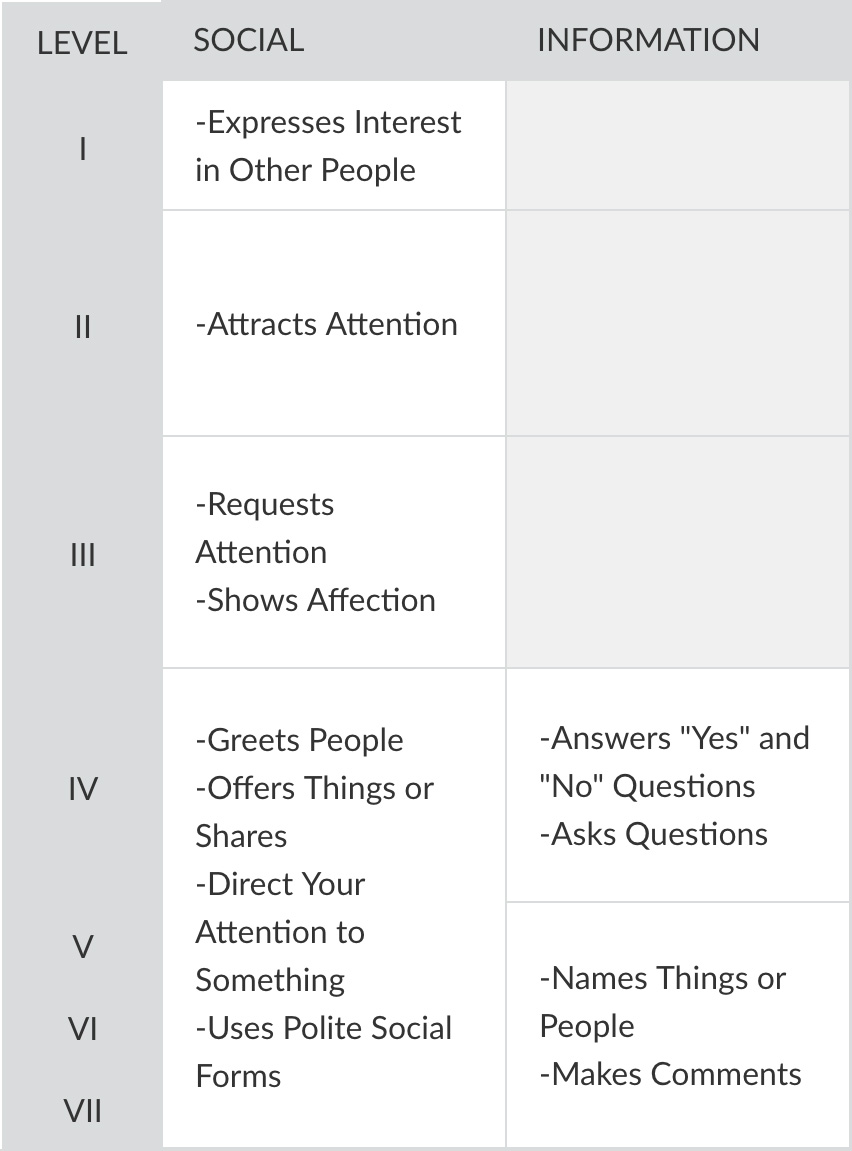 The seven levels range from Level 1, “pre-intentional behavior” that reﬂects a general state (think of the way a baby shows it is sleepy or uncomfortable) all the way up to Level 7, using language. In between are a range of ways to communicate, if we know how to look for them.

Behavior is not under the individual’s own control, but it reﬂects his general state (such as comfortable, uncomfortable, hungry or sleepy).

Caregivers interpret the individual’s state from behaviors such as body movements, facial expressions and sounds. In typically developing children, this stage occurs between 0 and 3 months of age.

Behavior is under the individual’s control, but it is not yet used to communicate intentionally. Individuals at this stage do not yet realize that they can use their own behaviors to control another person’s behavior.

Caregivers interpret the individual’s needs and desires from behaviors such as body movements, facial expressions, vocalizations and eye gaze.

In typically developing children, this stage occurs between 3 and 8 months of age.

Communicative behaviors include body movements, vocalizations, facial expressions and simple gestures (such as tugging on people).

In typically developing children,this stage occurs between 6 and 12 months of age.

Conventional pre-symbolic behaviors are used intentionally to communicate. Communicative behaviors are “pre-symbolic” because they do not involve any sort of symbol; they are “conventional" because they are socially acceptable and we continue to use them to accompany our language as we mature. The meanings of some gestures may be unique to the culture in which they are used.

Communicative behaviors include pointing, nodding or shaking the head, waving, hugging, and looking from a person to a desired object. Some vocalizations may also be used at this stage. Note that many of these gestures (and especially pointing) require good visual skills and may not be useful for individuals with severe vision impairment. In typically developing children, this stage occurs between 12 and 18 months of age.

“Concrete" symbols that physically resemble what they represent, are used to communicate. Concrete symbols look like, feel like, move like, or sound like what they represent. Concrete symbols include pictures, objects (such as a shoelace to represent "shoe"), "iconic" gestures (such as patting a chair to say "sit down"), and sounds (such as making a buzzing sound to mean “bee”). Most individuals skip this stage and go directly to Level VI. For some individuals concrete symbols may be the only type of symbol that makes sense to them; for others they may serve as a bridge to using abstract symbols.

Typically developing children use concrete symbols in conjunction with gestures and words, generally between 12 and 24 months of age, but not as a separate stage.

Abstract symbols such as speech, manual signs, Brailled or printed words are used to communicate. These symbols are “abstract” because they are NOT physically similar to what they represent. At this level they are used one at a time.

In typically developing children, this stage occurs between 12 and 24 months of age.

Symbols (concrete or abstract) are combined into two- or three-symbol combinations ("want juice", "me go out"), according to grammatical rules. The individual understands that the meaning of symbol combinations may differ depending upon how the symbols are ordered.

In typically developing children, this stage begins around 24 months of age.

Communication can happen through movements of the body, the face, the eyes and the hands, as well as through sounds and words. Some categories happen on several levels of development, while others happen only on one level (below).

(shaking head “no”, waving goodbye, pointing, nonspeech vocalizations with intonations such as a questioning intonation)

(spoken words manual signs, written words, Brailled words, abstract 2- or 3-dimensional symbols that have no perceptual/physical similarity to what they represent)

(2-dimensional or 3-dimensional symbols with clear perceptual/physical similarity to what they represent, also iconic gestures such as patting a chair to say “sit down”)

(look at person or object)

Designed for SLAs and Educators

It was first published in 1990 and was revisted in 1996 and 2004 by Dr. Charity Rowland of Oregon Health and Science University.

It was designed primarily for speech-language pathologists and educators to use to document the excessive communication skills of children who have severe or multiple disabilities, including children with sensory, motor and cognitive impairments. 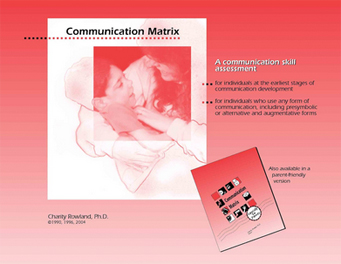 The origional version of the Matrix was primarily designed for use by speech-language pathologists and educators. It is sold at cost through www.designtolearn.com.

A more "user friendly" version, designed especially for parents, was published in 2004 in response to requests from the field. The results of both professional and parent versions are summarized on a one-page Profile that shows what level of communicative behaviours the child uses and what kinds of messages, or communicative intents, are expressed. These profiles allow parents and professionals to directly compare the information they have from home, school or clinic to provide a comprehensive portrait of a child's communication skills. 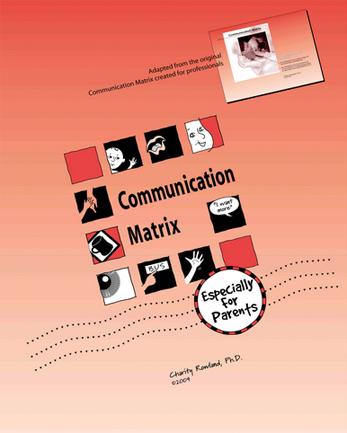 Donate Now The Communication Matrix project is not-for-profit and relies in part on donations from our community.

For more information, download a paper that explains the organization and structure of the Matrix, the research that formed the conceptual basis for the instrument, and its psychometric properties.

You can also purchase the origional print version of the Matrix for professionals at www.designtolearn.com. It uses a concise format that is designed for rapid administration by persons familiar with the assessment. 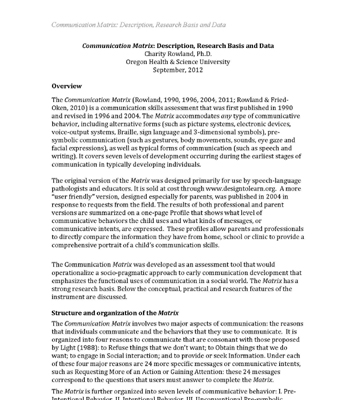 The Matrix is FREE for everyone. Help us maintain and improve it with a tax deductible gift.
Donate

The Communication Matrix is a service of Design to Learn at Oregon Health & Science University
© 2023 Charity Rowland, Ph.D.

Site by State33 and Smith & Connors

Please select a statement below that describes the type of matrix administration that you would like to begin.

Please wait while we process the matrix ...

You are about to TRY the Matrix Assessment tool.

Your information will not be saved unless you register. You may register for free at anytime throughout the tryout by clicking the orange button bottom right.

Your information is private.

The information you enter in the assessment is completely secure and cannot be identified. When you use this free service, we ask you to provide some very basic information about the individual you are assessing (gender, age, ethnic background, country of residence, disability and specific impairments) and your relationship to that person. However, we have no way of indentifying who has used this service.

Many teachers require their college students in communication disorders or child development classes to complete a Communication Matrix online. Please have your students use the Test Drive site for this purpose. You may ask them to print out the Profile and Communication Skills List as proof of their work.

How you want us to refer to the person you are assessing:

My child
Individual
Next

My child doesn't seem to have real control over his body yet.

The only way I know that he wants something is because he fusses or whines when he's unhappy or uncomfortable, and he smiles, makes noises or calms down when he's happy and comfortable. Does this statement describe your child?

My child has control over her own behaviors, but she doesn't use them to try to communicate to me.

She doesn't come to me to let me know what she wants, but it's easy for me to figure out, because she tries to do things for herself. She knows what she wants, and her behavior shows me what she wants. If she runs out of something to eat, she will just try to get more, rather than trying to get me to give her more.

Does this statement describe your child?

My child clearly tries to communicate his needs to me through gestures, sounds or language.

He knows how to get me to do something for him. He uses some of the kinds of behaviors below to communicate:

Does this statement describe your child?

The remainder of the Communication Matrix is not applicable to your child based on your response to the last question. You have completed this assessment.


How to score your child

– Does this independently most of the time when the opportunity arises
– Does this in a number of dierent contexts, and with dierent people